Just over one-third (36%) of PE funds which were in the top quartile for one vintage were also top quartile for the next vintage for the same general partner (GP). Meanwhile, nearly two-thirds (64%) were in one of the top two quartiles, and only 16% dropped to the bottom.

This is according to Schroders Capital’s analysis of 3,512 PE funds raised since 1980 (only GPs with at least two funds are included, and if the funds have a track record of at least seven years, as performance of younger funds is still fluctuating and not definitive).

This counters well-known disclaimers, which repeatedly tell us that past performance is not a guide to the future and may not be repeated. And although that is true, is there a nuance to consider between public and PE funds on this front?

Our analysis suggests the past performance of PE funds may provide some useful information to help think about how they might perform in future.

This is a very different picture to what we see with public equity funds. A recent study found there was a greater chance that a public equity fund in the top quartile for one five-year period dropped to the bottom for the next, than maintained its standing.

Digging down a level, our research shows this holds strongly for funds investing in both North America and Europe, and for both buyouts and venture capital. Importantly, this persistency is statistically significant, as explained later.

It also holds for funds investing in Asia, but not to the same degree of statistical significance – partly influenced by there being fewer funds in this category, which limits the conviction with which we can draw conclusions. 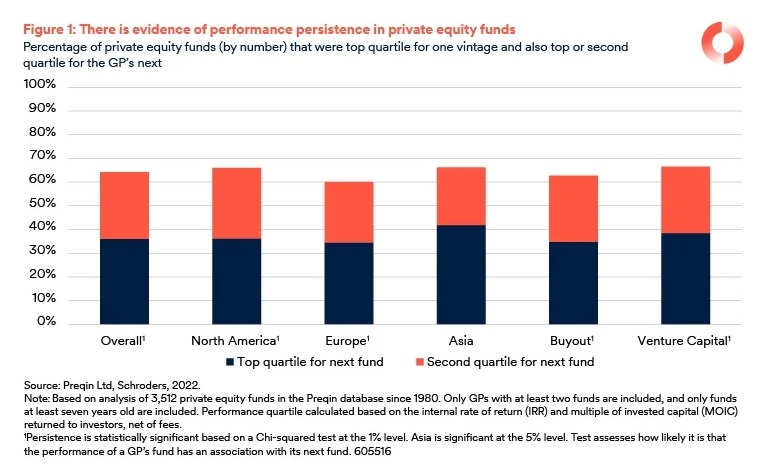 However, when we analysed funds by size, the results were striking.

For example, good performance persistence is greatest among small funds, strong and significant among medium-sized funds, but weak among large ones. This is an important result for PE investors, especially given that many allocate to large funds run by large managers.

Pouring over their past performance may be less worthwhile than you realise – the performance disclaimer was right all along. But it can be more useful when looking at the long tail of small and medium-sized funds which make up the bulk of the industry (in terms of number of funds).

The Schroders Capital analysis provides evidence of performance persistence in PE – in all major areas apart from large funds.

While investors should never make an investment decision based on past performance alone, this new research suggests investors may not want to ignore it either.


IMPORTANT INFORMATION
Investment involves risks. This material is issued by Schroder Investment Management (Hong Kong) Limited and has not been reviewed by the SFC.

About our analysis
The data used in this study comes from the Preqin Performance database for Private Capital. This is subject to a degree of selection bias as voluntary contributions by fund managers are unlikely for poorly performing funds. However, Preqin seeks to limit this by using a range of other approaches, including the Freedom of Information Act (FOIA) and systematic processing of regulatory filings, press releases, news and websites.

There are 9,834 funds in the Preqin database. To be included in our analysis, funds must be either ‘Closed’ (fundraising is closed) or ‘Liquidated’. Only funds older than seven years are analysed. This is to avoid analysing funds whose performance is still fluctuating and not definitive. Only funds with a vintage year after 1980 are analysed. Either the net IRR or the net MOIC of each fund must be available (ideally both). Funds comprised of a single asset and GPs with less than two funds are not considered. Applying these filters reduces the number of funds in our universe to 3,512.

Our universe is influenced by survivorship bias as the probability of a GP launching a second fund will be dependent on sufficiently good performance from its first fund. As we are only looking at GPs with at least two funds, the funds in our universe are likely to be higher quality than the universe overall.

We form contingency tables and run chi-squared tests to test for statistical significance for different slices of the data (regions, strategies, fund sizes or all together). The null hypothesis is that the performance of a fund has no association with the performance of the next fund. P-values are calculated as a measure of statistical significance.