Munaweera has over 25 years of experience in the insurance industry in Sri Lanka. She is the director of legal and operations of AIA Insurance Lanka responsible for life operations, corporate law, company secretarial and external relations and has previously been the AIA’s chief HR officer and chief compliance officer. She has been a member of the executive committee of the company since 2006. Advani will succeed current CEO Kris Chantanotoke, who became CEO of AIA Thailand in January 2021. According to local media, Chantanotoke will join Siam Commercial Bank as chief executive from August 1.

The new AIA Thailand CEO Advani will report to Bill Lisle, AIA Group regional chief executive. Advani has over 26 years of experience in the  insurance and financial industries. He joined AIA Group in 2011 and became CEO of AIA Insurance Lanka in January 2019, responsible for the company’s new life insurance product portfolio and expanding its footprint in the health market.

Tsang has worked in Hong Kong’s civil service sector for over 30 years across the government offices of trade, commerce, housing, industry, technology, and finance. His tenure included 10 years as the Financial Secretary for the territory.

As an advisor to StashAway, Tsang will be in a position to guide the public when it comes to investing, having consistently been a strong advocate of education, the firm said in a statement. 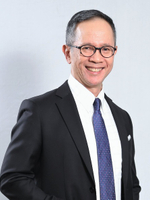 Mahendra, 59, is expected to relinquish his cabinet position once his appointment as head of the agency known as OJK is approved by the parliament within the next few weeks, the report dated April 7 said.

The Indonesian parliamentary commission that oversees financial affairs had selected him from among several shortlisted candidates to improve OJK's supervision of financial institutions. The OJK has been criticised by lawmakers for its lax oversight of the insurance sector following the 2018 default of state-owned insurer Jiwasraya and complaints about bad returns on unit-linked insurance plans issued by several insurance firms.

The new appointees will serve on the board of the financial sector regulator from 2022 to 2027.

FWD Philippines has appointed Antonio Manuel De Rosas as an independent director and Ken Lau as a non-executive director, said a company statement. De Rosas, whose appointment took effect on March 25, will oversee, guide and mentor FWD leadership towards its growth strategies for local business operations. He will be instrumental in advancing corporate credibility and raising governance standards with his objective and balanced perspective, the statement said.

De Rosas has over 35 years of experience in insurance, banking, and public accounting. He is a certified information systems auditor and is the first in the country to receive a Chartered Global Management Accountant (CGMA) title. He first joined FWD in 2018 as managing director for Greater China and CEO for Hong Kong and Macau spearheading technology-driven and customer-led strategy. He is also a fellow of the Society of Actuaries.

According to FWD Philippines, he will continue to hold on to his management positions after he joins the board.

Resolution Life has announced the establishment of its Representative Office in Singapore, naming key appointments to spearhead its expansion into Asian markets. At the helm of this expansion is Rushabh Ranavat, managing director of Resolution Life Asia, who will continue to be based in London. He has been responsible for leading the London team in developing the Group strategy, guiding capital deployment, and leading capital raising activities.

He joined Resolution in 2014 and began his career as a consultant at McKinsey & Co, working across the financial services, healthcare, and private equity practices. Kirstin Rankin
The other key appointment is Kirstin Rankin, Asia chief operating officer and chief representative, who previously served as the company’s group general counsel in London.
Based in Singapore, Rankin is a corporate and mergers and acquisitions lawyer with 20 years of experience and expertise in the financial services and private equity sectors. She joined Resolution in 2016, working on both the third (US-based Resolution vehicle) and the launch of Resolution Life Group Holdings Ltd.
The third appointment is Yan Sun, who joins as head of solutions in the Singapore office. The announcement of the Representative Office comes after the company’s acquisition of AIA’s superannuation and investments business in early 2022, as well as a series of successful transactions with Europe’s Allianz Suisse Life and North America’s Allianz Life and Lincoln Financial Group during the last half of 2021. With this acquisition, WTW has added the insurance broking operation to its portfolio of businesses and operations in India which currently employs over 4,000 people. These include its HR, benefits advisory, risk and insurance consulting businesses and WTW’s global delivery centres across India.

Nath started the new role as head of India on April 11 and report to Clare Muhiudeen, head of Asia. Nath will relocate from Singapore to Gurugram, India, in mid-2022. He takes over from Rohit Jain who will continue to be involved in WTW India as a director on the board of WTW India Insurance Brokers.

Nath joined WTW in 2006 and has held several general management positions. He was most recently the head of South Asia and country manager of Singapore.

There will not be a replacement of the South Asia role as the firm no longer has this position in Asia, it told AsianInvestor. The country leader for Singapore is Choo Oi San, whose appointment was announced last month. Mio joined Fidelity International in Hong Kong in September 2020 as director of Asian equities, overseeing the company’s research management team across the Asian investment offices, reporting to Ned Salter, Hong Kong-based head of equities Asia ex-Japan and global research. Before Fidelity, she was the chief investment officer for China and co-head of Asia Pacific equities at Robeco Asset Management.

Fidelity International did not respond to requests for comments. SECTORAL AM TAPS ASIA REGINAL DIRECTOR FROM NIKKO AM

Based in Hong Kong, Zhang was with Nikko AM since April 2018. Prior to that, she held marketing and business development roles with Societe Generale Corporate and Investment Banking (SGCIB) and UBS.

Kim will be based in Singapore and will be responsible for driving organic growth for IQ-EQ’s regional business.

With over 25 years of experience, Kim was most recently at Northern Trust Asset Servicing as its head of client relationship management for Southeast Asia, where he focused on driving growth and maximising client satisfaction. Prior to that, he worked at BNY Mellon for almost a decade as a managing director.

Northern Trust Asset Servicing did not respond to AsianInvestor’s enquiry on Kim’s replacement.

IQ-EQ has had a presence in Asia for over 25 years, with offices in Singapore, Hong Kong, mainland China, the Philippines, and Japan. Based in Singapore, Ramchandran will be responsible for driving the strategic hotel and hospitality transaction business that includes portfolio sales, mergers and acquisitions, partnerships and capital transactional services for both debt and equity.

Ramchandran joins CBRE from IHG Hotels and Resorts, where he spent over seven years since 2014 and was most recently the vice president, capital investments and transactions and global head of branded residential until April.