Aaten is a seasoned business executive with more than 27 years of experience and expertise in a wide range of financial services. He joined APG in 2001 and has served in numerous managerial roles in the Netherlands and Hong Kong, most recently as chief finance and risk officer (CFRO) of APG Asset Management Asia. He has also been responsible for the fund’s risk management, compliance, and finance functions for the last four years.

“It is my true privilege to be appointed to lead this business. It is a great company, with a world-class team. We have laid solid foundations to take the business to the next level and I’m looking forward to working with the team to achieve our growth ambitions,” Aaten told AsianInvestor.

Prior to his role as CFRO, Aaten was responsible for establishing the APG Treasury Center, a licensed investment firm which acted as the central dealing desk and counterparty for APG’s clients and funds. He is also a board member of ISDA, the International Swaps and Derivatives Association.

Aaten succeeds Wim Hazeleger, who is stepping down as CEO of Apac after leading the $624 billion pension fund’s operations in the region for the last ten years. As CEO of APG Asset Management Asia, Hazeleger was responsible for leading and overseeing the development and execution of the fund's strategy in Apac, and its business operations across Hong Kong, Shanghai, and Beijing.

During his tenure, Hazeleger has driven and implemented restructuring efforts, including optimising organisational structures, and empowering key leaders with renewed vision. He will be leaving APG to pursue new opportunities, a spokesperson for the fund told AsianInvestor.

Meanwhile, Michael van Ommeren will join the Asia Pacific leadership team as the new CFRO, to fill the vacancy left by Aaten. Also based in the Hong Kong office, van Ommeren’s appointment will be effective from September 1. 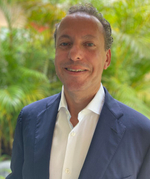 Previously, van Ommeren was the chief operating officer at Indosuez Wealth Management, where he was also responsible for the finance and treasury function. Before that, he worked amongst others as chief operating officer for the Hong Kong branch of Dutch ABN Amro Bank and Standard Chartered Bank in Singapore, where he gained experience in operational risk management.

“We are fortunate to have Thijs take over as CEO of our Asia Pacific operations. He is an accomplished financial expert, and APG has gained from his broad vision and ability to make good use of opportunities for many years now,” said Wuijster.

“I look forward to a pleasant and fruitful cooperation with both Thijs and Michael and the continued success of our Asia Pacific business.”

The Metaverse: APG explores a galaxy of options for financial services